Annette Potter is the manager and founder of The Heath Stud, since a young age Ms Potter has had a true passion for horses especially race horses. At only 17 she became an assistant trainer to Malcolm Eckley and at 18 rode as an apprentice jockey for R W Morris at Long Mountain.

She carved a successful career in the industry which has led her across the world, breaking in yearlings while acting as a work rider for D V O'Brien in Ballydoyle, Ireland. During her time there she broke in many big race winners including the derby winner Secreto.

After which she progressed onto being a track work rider for T J Smith in Sydney, Australia, the champion trainer 34 years running. On returning to the UK Ms Potter began breaking and pre-training horses for many notable clients around the country including Martin Pipe.

In 1987 Ms Potter felt it was time to begin her own business, to acquire her own permanent yard and establish breeding lines. Drawing from her experience in the racing industries of the world, she chose top class mares and champion sires to produce only the most excellent horses.

The Heath Stud's first foal Really A Rascal achieved 3 wins and from this success the business has grown and grown producing names such as: Green Hill Fly Away, Little by Little, Henry Henbit and Tylers Cottage.

Ms Potter has continued producing brilliant horses that have won many races, point-to-points and hunterchases even achieving a win of the coveted Lady Dudley Cup.

The current stock of horses we are offering for sale or lease can be veiwed on the horses page. 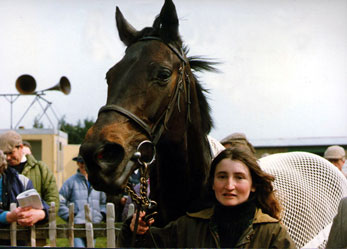